Japan is home to an abundance of creepy urban myths, and tales of Japanese demons have been featured in famous movies as well. Read this Mysticurious article which features a list of the top 10 spine-chilling Japanese urban legends. 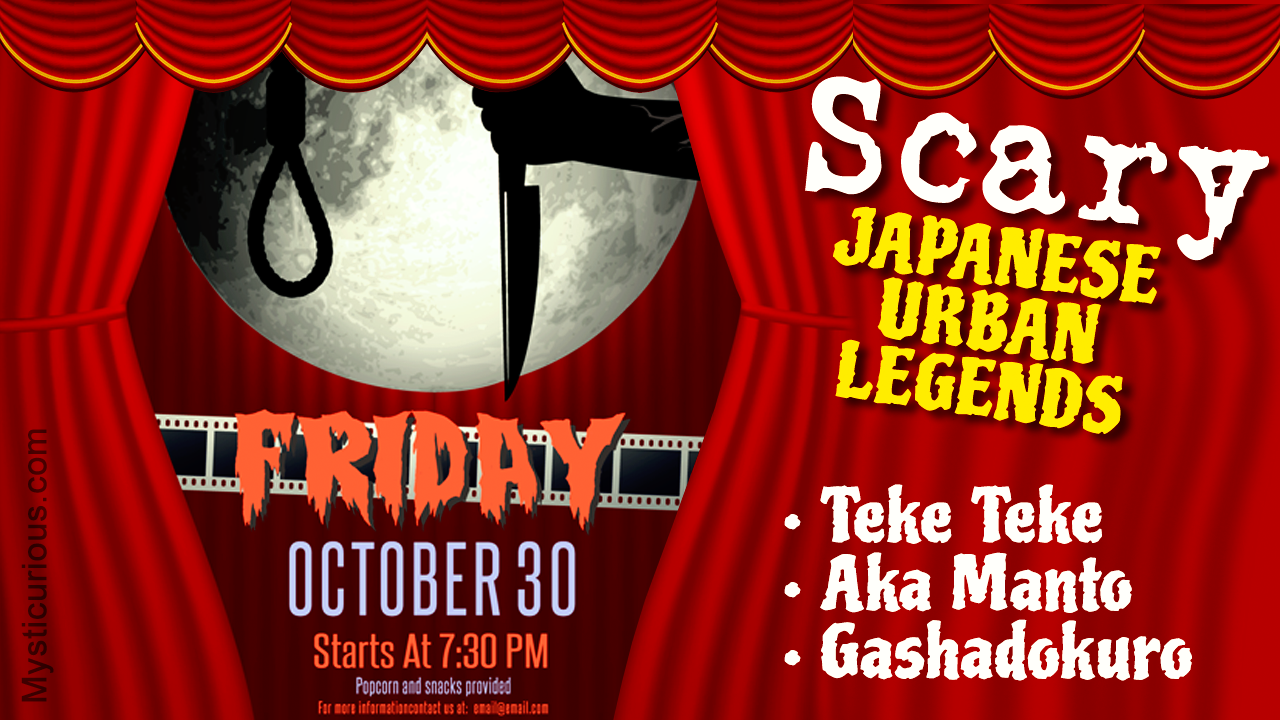 Japan is home to an abundance of creepy urban myths, and tales of Japanese demons have been featured in famous movies as well. Read this Mysticurious article which features a list of the top 10 spine-chilling Japanese urban legends.

Spooky Shot!
A popular Japanese demon is the Isonade. Apparently, it is a shark with huge, holed fins and sharp teeth, which it uses to tear down human flesh. The tale is told to scare children so that they do not venture into deep waters.

Every country has certain folklore that have evolved since the ancient ages, and Japanese culture is no exception to this. Some spooky tales from Japan probably have their origins in some true incidents, some in hallucinations, or some may be just to scare people so that they do not take unnecessary risks, like taking a walk near the cemetery or trying to swim in the deep, risky oceanic waters. Considering our city-hardened, scientific minds, we would probably agree with the third probability.

Even today, these urban legends have been told over and over again, and some opine that they are indeed true, and that the frightening monsters are for real. Well, whether they exist or not is a matter of belief and conjecture, it would be much more interesting to get to know more about some of these myths. The paragraphs below will tell you about some of the scary Japanese urban legends.

This story is supposed to have originated post World War II. Amazake-baaba is an old lady who will knock at your door several times in the dead of the night. She is smeared with blood, and she would ask for a cup of sake (Japanese drink). If you give it to her, well and good, if you don’t, she will curse you and your family to death.

She is a woman who is said to have fallen/jumped in the path of a speeding train. Consequently, the train cut off her legs. Now, she drags herself on her elbows, and cuts off the legs of anyone she meets, to relieve her anguish. She is called so, because she makes a teke teke sound when she crawls.

This urban legend is so scary that people apparently even fear mentioning it. Till date, no one knows the exact tale, and those who have apparently heard it are in no state to retell it again. They are either dead or have gone insane. This tale is supposed to be one of the most psychologically-affecting stories till date. The name itself causes people to tremble violently, and there is no way of knowing what is so spine-chilling about the tale that causes people to lose their minds.

This legend is about a little girl who haunts the girls’ restrooms in schools. She is dressed in a red uniform, and has a pale face and short hair. Apparently, if you knock on the third toilet from the end and ask, “Hanako, are you there?”, she will reply, “Yes, I am here.” At this juncture, it is better to run away from the restroom, or else, Hanako will pull you inside and finish you off. This tale is very famous and has been adapted into movies as well.

It is like an Ouija board. People write down characters and ask Kokkuri-san a question. She may answer the question by making the pen move on its own. If however, you do not finish the game correctly, she will kill you.

According to the legend, a woman named Funayurei was raped by a group of sailors, and murdered by drowning. Now, she seeks revenge by attacking ships and terrorizing the local fishermen. Funayurei is said to be reason behind many unexplained pirate deaths and ship accidents.

Kashima Reiko was also an unfortunate woman who was physically assaulted and left for dead in a restroom. She tried to escape and fell unconscious on the railway tracks. An ongoing train cut her into two. Now she keeps haunting restrooms to look for ways to restore herself.

She is an old woman who died of grief due to her son’s untimely death due to starvation. She kept crying and crying, until her eyes started bleeding. Now she tries to possess small children, to assuage the grief of her dead son.

She is a giant spider monster, who can sometimes transform into a beautiful lady. The tale says that she takes on her beautiful feminine form, seduces men, and traps them in her web. Then, the men are poisoned, and she eats them up. Another version says that she also holds a baby, and requests the men to hold it. When they do so, they find that the bundle is actually made up of thousands of spider eggs.

According to the legend, Gashadokuro is a huge skeleton monster made up of the bones of those people who have died of starvation. It is said that the skeleton will corner you, grab you, cut off your head, and drink your blood. After that, your bones are added to the existing pile as well.

This curious tale involves a teenage boy who bought the doll for his little sister, named Okiku. The girl was extremely fond of the doll, she spoke to it, dressed it, and spent every moment playing with it. Unfortunately, she died soon. Her family refused to throw out the doll. Some time after Okiku’s death, they noticed that the doll’s hair started growing. They decided that Okiku’s soul was probably residing in the doll she loved so much. They decided to then hand over the doll officially to the Mannenji temple in Iwamizawa, and it remains there even today. Some say that her hair keeps growing so freakishly that it has to be trimmed regularly.

Legend says that the Japanese believed in human sacrifice to please the gods. Many structures in Japan contain huge pillars. While building a pillar, a human used to be sealed inside it, to ensure that the structure remained strong. However, the ghosts of those people who are encased inside the pillar are said to wander around those buildings.

She is supposed to be an amphibian ghost, for she has the head of a woman and the body of a snake. She has long hair, fangs, and her eyes resemble those of a snake. She is a murderous monster, and she sucks out all the blood from her victim’s body, if they refuse to do her bidding. Some say that she simply prefers to be alone by the seashore while washing her hair, without being disturbed. And if she is disturbed, she reacts violently and prevents her victims from fleeing.

Hikiko was a shy, reserved schoolgirl who was bullied by her classmates and abused by her parents. In fact, she was bullied so much that she was physically deformed. Eventually, one day, she was beaten to death. Enraged and vengeful, her spirit now seeks revenge. Hikiko supposedly drags students across the floor, and then kills them gruesomely. This tale is probably narrated to children in order to make sure they do not bully or abuse any classmate.

It is difficult to believe that there are actually so many scary stories, isn’t it? Well, I am sure your inquisitive, crafty mind might want to actually try out whether Hanako really exists in a girl’s restroom or if Kuchisake-onna roams around with a pair of scissors. Take my advice, just read the legends, laugh about it, and go back to sleep. Even though we know they are just tales, we do not want to tempt fate, do we? Take care!!