Shocking and Intriguing Things Worth Knowing About Familiar Spirits

The existence of familiar spirits, often simply called familiars, has been linked with witches and cunning folk. Familiars were the helpers, or to say, protectors of these sorcerers who used their assistance to harm (or aid) others. If you are intrigued by their mention in the ancient records, this Mysticurious post will help you in knowing all about familiar spirits and their views in different sections of the society. 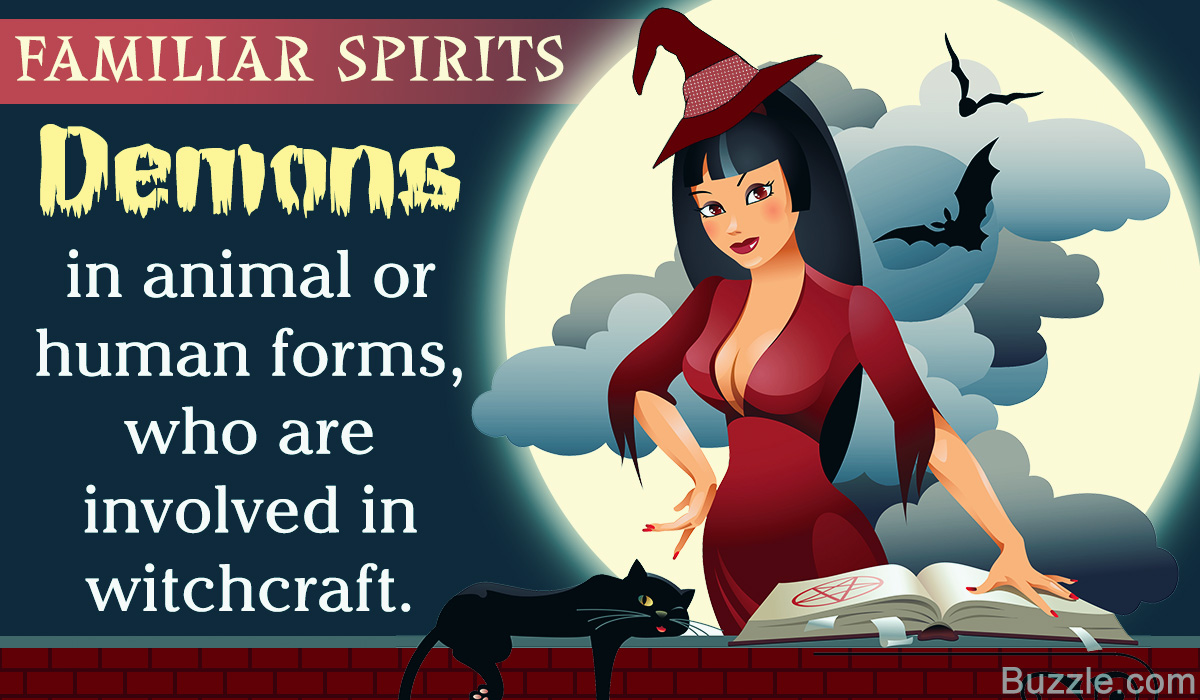 The existence of familiar spirits, often simply called familiars, has been linked with witches and cunning folk. Familiars were the helpers, or to say, protectors of these sorcerers who used their assistance to harm (or aid) others. If you are intrigued by their mention in the ancient records, this Mysticurious post will help you in knowing all about familiar spirits and their views in different sections of the society.

The Mystery of Prince Rupert’s Dog

Prince Rupert of the Rhine, KG, PC, FRS , had a huge white poodle named Boye. It was believed that his dog was a witch’s familiar as he possessed extraordinary abilities and accompanied Prince Rupert everywhere, even in a war. He could catch bullets fired at the prince with his mouth and was invulnerable to attack. The enemy had to kill him with a silver bullet.

If you go back to the earlier times, the search of familiars would take you to the Medieval and Early Modern period of Europe, where witchcraft was considered to be a common practice. Infamous witches including Bessie Dunlop, Agnes Sampson, Anne Palles, and many others, agreed to have been using the help of familiars to execute their tasks. All of these underwent trials and were burned to death when found guilty of practicing sorcery, something considered to be a grave sin in Christianity.

Those practicing witchcraft and sorcery were either witches or cunning folks, the latter also being known as “White Witches”, who did good to people rather than harm them. They used folk medicines, folk magic, and their divination powers to help those in need, and therefore, were distinguished from witches who were their evil kins. However, since they used magic, the Church considered them to be in league with the Satan, similar to the witches. But they were not hunted and executed like the witches, in those times.

What is a Familiar Spirit?

The Oxford Dictionary defines a ‘Familiar Spirit’ as “A demon supposedly attending and obeying a witch, often said to assume the form of an animal.” However, there are sources that state that a familiar can also be in a humanoid form, although an animal form is more frequently recorded in witch trails of the past. It is believed that the familiars had traits that were similar to those they were serving. For instance, it was said that those that assisted witches were generally wicked, while those that were with the cunning folks were benevolent.

How Do Familiar Spirits Operate?

Different witches have stated different accounts in terms of how these supernatural beings came into their lives and how they assisted them. While some testified that their familiar suddenly appeared in front of them when they least expected them, others stated that they were assigned or given to them by their ancestors. For instance, in 1667, a witch from Liverpool named Margaret Ley stated that her familiar came to her through her mother―who was possibly a witch too―after her death. On the other hand, in 1645, a Cornish cunning woman named Anne Jeffries stated that her familiar appeared for the first time when she was “knitting in an arbour in our garden.”

In a number of recorded witch trials, it was observed that the familiars appeared or came to the aid of witches and/or cunning folks during desperate times of need, mostly on the lines of physical survival. These supernatural beings came forth in the most natural forms, often given quite common nicknames, and helped these sorcerers overcome their struggle by giving them magical powers, assistance, and protection. In case of witches, many have attested that they made a pact with Satan, where in lieu of the magical help and a familiar(s), they would trade their body and soul to the Devil, and in some cases, also baptize their children in the name of Satan instead of God, as was the case of a seven-year-old German girl named Brigitta Horner, who in 1639, claimed to be a witch.

Usually, there is a pact between the witch/cunning person and their familiar, which may last a few weeks to many decades. While some stated that they had to do a particular activity to summon their familiars, others said that they had no control on when they would appear. One witch from Essex named Joan Cunny, in 1589, stated that in order for her familiar to appear, she had to kneel down within a circle and pray to Satan. The familiar could then spy, attack, harm, or magically wreak havoc in the lives of those in the bad books of the witch. In case of cunning folks, the familiars gave them the desired knowledge and understanding to use folk magic, divination, and folk medicine to help those in need.

What Does the Bible Say About Familiar Spirits?

There are various verses in the Bible that state it clearly that the practice of dealing with familiar spirits is highly condemned by God. In no account should a Christian follower practice, or seek help from those involved in sorcery, divination, and summoning the dead. These are means of defilement and will take you away from God. The following are the texts mentioned in the King James Version (KJV) of the Holy Bible in support of the same.

✞ Regard not them that have familiar spirits, neither seek after wizards, to be defiled by them: I [am] the LORD your God. ― Leviticus 19:31

✞ So Saul died for his transgression which he committed against the LORD, [even] against the word of the LORD, which he kept not, and also for asking [counsel] of [one that had] a familiar spirit, to enquire [of it]; And enquired not of the LORD: therefore he slew him, and turned the kingdom unto David the son of Jesse. ― 1 Chronicles 10:14

✞ And the soul that turneth after such as have familiar spirits, and after wizards, to go a whoring after them, I will even set my face against that soul, and will cut him off from among his people. ― Leviticus 20:6

✞ And he caused his children to pass through the fire in the valley of the son of Hinnom: also he observed times, and used enchantments, and used witchcraft, and dealt with a familiar spirit, and with wizards: he wrought much evil in the sight of the LORD, to provoke him to anger. ― 2 Chronicles 33:6

✞ And when they shall say unto you, Seek unto them that have familiar spirits, and unto wizards that peep, and that mutter: should not a people seek unto their God? for the living to the dead? ― Isaiah 8:19

✞ A man also or woman that hath a familiar spirit, or that is a wizard, shall surely be put to death: they shall stone them with stones: their blood [shall be] upon them. ― Leviticus 20:27

✞ There shall not be found among you [any one] that maketh his son or his daughter to pass through the fire, [or] that useth divination, [or] an observer of times, or an enchanter, or a witch, Or a charmer, or a consulter with familiar spirits, or a wizard, or a necromancer. For all that do these things [are] an abomination unto the LORD: and because of these abominations the LORD thy God doth drive them out from before thee. ― Deuteronomy 18:10-12

✞ But the fearful, and unbelieving, and the abominable, and murderers, and whoremongers, and sorcerers, and idolaters, and all liars, shall have their part in the lake which burneth with fire and brimstone: which is the second death. ― Revelation 21:8

Christianity clearly states that the whole usage of sorcery, familiar spirits, and witchcraft is nothing but a tool of the devil to manipulate humans and lure them to commit evil. Such practices give power to demonic forces that only pretend to be helping the person (mostly in malicious tasks), but eventually make them lose quite a lot in the bargain. Take the instance of witches who were burned at the stake (the traditional way of killing such practitioners), could they be saved by these familiars? The Devil cannot grant life and glory, but only a shameful end. It is best to pray to the Lord our God to obtain deliverance and protection from them.

While Christianity clearly states the familiars as demonic forces, the modern Wicca and Pagan followers practice the concept sportingly with a different belief. According to them, a familiar spirit, or an animal guide, is nothing but a being which shares a psychic bond or belonging with its partner and looks out for him/her all the time, something like what we saw in the controversial 2007 fantasy-adventure movie, The Golden Compass.

There are basically three categories of familiar spirits that have been mentioned in the western European Mythology: (1) Human familiars in Western Europe; (2) Divinatory animals in Great Britain and France; (3) Maleficent animals, recorded only in Greece. With so many recorded proofs, it is illogical to say that the concept of familiar spirits is a myth, or non-existent in today’s world. At the end of the day, it all comes down to one’s perception towards their existence, and which book of faith does one follow to categorize the concept into good or bad.