7 Mind-altering Predictions Made by Edgar Cayce

Edgar Cayce had identified himself as a healer all his life, who never used his gifts for profit. Through his predictions, he would usually help people diagnose health problems; sometimes, he would make predictions about wars, natural calamities, and matters of political importance. Here are some of his most famous predictions. 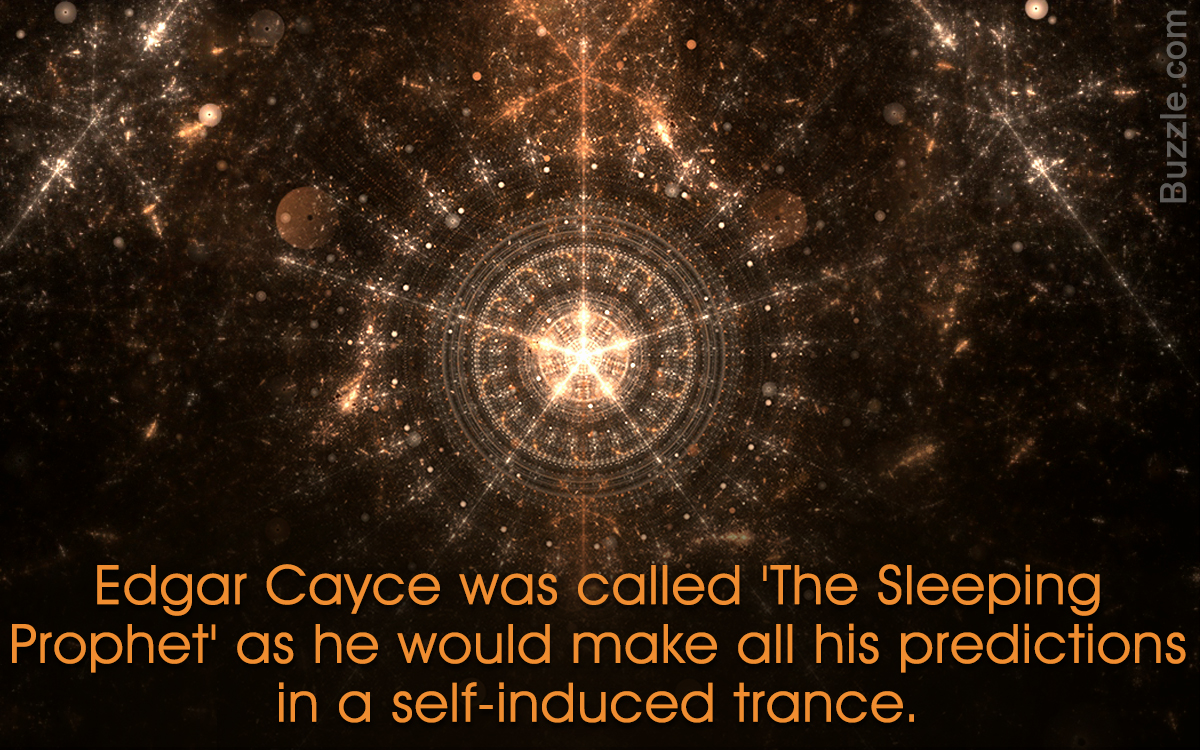 Edgar Cayce had identified himself as a healer all his life, who never used his gifts for profit. Through his predictions, he would usually help people diagnose health problems; sometimes, he would make predictions about wars, natural calamities, and matters of political importance. Here are some of his most famous predictions.

Edgar Cayce is the most documented psychic of the 20th century. Today, a total of 14,306 documented readings of his are available at the headquarters of the Association for Research and Enlightenment, in Virginia.

Edgar Cayce is regarded as the father of holistic medicine. He allegedly was a psychic who possessed healing abilities. He has spoken on varied topics like wars, reincarnation, and predicted certain future events as well. Cayce identified himself as more of a healer rather than the public perception of him as psychic. He was the founder of the non-profit organization the Association for Research and Enlightenment.

Cayce would make all his predictions in a self-induced trance. He could allegedly make predictions for people who were miles away from him. His wife, Gertrude, would usually guide him through his predictions. She would tell him the name and the place of a seeker, and he would tell the ailment the person is suffering from along with its cure. Most of his work is well-documented thanks to his secretary, Gladys Davis.

All his life Cayce was a follower of ‘Disciples of Christ’, he would teach at Sunday school, and recruited missionaries. He earned his living through any voluntary donations made to him. He, however, refused to help those who came to him for monetary benefits. Cayce asked his subjects to test his readings rather than just accept them. Here are a few of the predictions made by him.

Edgar Cayce had predicted the crash of the stock market on two occasions. In February 1925, during a reading for a physician, Cayce mentioned that he would find a lot of wealth. He also advised him to exercise caution as this new-found wealth would be easily taken away from him around the year 1929. On another occasion, Cayce warned a New York stockbroker about the forthcoming financial doom.

In the year 1935, Cayce predicted a war in which many nations would participate. He mentioned countries like Austria, Germany, and Japan joining the war. He also mentioned that the U.S. would enter this war in 1941. He described the magnitude of this war as the world set on fire. The year before that he also predicted that Hitler would reign over Germany until he is overthrown by an outside war.

Predictions About the Essene Community

Before the discovery of the Dead Sea Scrolls, very little was known about the Jewish sect called Essene. On January 17, 1934, more than a decade before the scrolls were discovered, Cayce described the sect in detail. Documented evidence later found that his details were remarkably accurate.

Shift of the Earth’s Poles

Geomagnetic reversal is a change in a planet’s magnetic field, such that the position of the magnetic north and the magnetic south are interchanged. Cayce predicted this shift in the poles to occur around the millennium, on August 11, 1936. It has been observed that the north-south polarity has started fluctuating in the region between Africa and South America.

Changes in the Earth

Edgar Cayce mentioned that there is a relationship between temperature changes and deep sea currents, which in turn influences the weather. He said that the heat or cold that is radiated would influence the wind currents. This prediction was very close what we today know as the El Niño effect.

Predicted his Own Death

With increasing requests from families of American soldiers fighting in the Second World War, he felt the need to help them find news of their loved ones out at war. He increased his predictions from 2 to 8 in a day. According to him, this took a toll on his health; he said the readings themselves asked him to slowdown or else it would kill him. Edgar predicted his death was fast approaching―four days after this prediction, Edgar died of a stroke.

Cayce had predicted the discovery of the civilization of Altantis will be around 1968-1969, off the east cost of North America. Debate about whether this prediction is true or not began when the Bimini Road was discovered in the Atlantic Ocean. Whether it is a road or a natural landform is yet to be ascertained.

According to him, this civilization was more advanced than ours and depended on giant laser-like crystals for energy to power their machines. He claimed this land to be as big as Asia and Europe combined. He also said the destruction of this land was due to the excessive greed of its inhabitants, and he compared the sinking of the civilization to the Biblical Great Flood of Noah. For this prediction of his, he has been severely criticized.

Today, the Association for Research and Enlightenment founded by Edgar Cayce has centers in about 37 countries and individual members in more than 70 countries across the world.